When people say “Mexico,” the next word to come to mind is usually “food.” And while the country does have a fabled cuisine (actually it is designated a UNESCO cultural heritage), it steals the limelight away from its impressive cinematic history.

The world, however, might be starting to take notice. In the past five years no less than four Academy Awards for directing have gone to Mexicans, Alfonso Cuarón, (2014), Alejandro G. Iñárritu (2015, 2016), and Guillermo del Toro (2018). If we think of Mexicans only being known for their 2D work, Iñárritu received an Academy Award for Special Achievement early this year for his virtual reality piece, Carne y Arena. He is one of the few accomplished 2D directors moving into VR.

But how is the new technology scene evolving at this moment for the rest of the industry in Mexico? VRTL spoke with Maite Argüelles, and Guillermo Sánchez, founding partner of San Millan Productions with Lumière Award winner Manuel Gutiérrez Novelo, all producers of Canción del Agua.

This immersive piece had the distinction of being commissioned by Los Cabos Film Festival in an effort to move the film festival towards future innovations. The cinematographer Santiago Barreiro was brought on by the producers to extend the VR encounter, and helps round out the conversation about VR in Mexico.

It's hard to see

Maite explains that one of the chief challenges is getting Mexicans in headsets. VR growth is “paralyzed” right now, because headsets are too expensive and the cardboard alternative is not much help, either. The average monthly salary of say an architect or software developer is around US $1100; the average iPhone to put in the cardboard costs around US $900. “The lack of headsets is compounded by the dearth of VR cinemas or dedicated places to exhibit projects,” says Guillermo. In Mexico, educating and evangelizing about the marvels of virtual reality requires a one-by-one approach.

For their own piece, Canción del Agua, a project directed by Felipe Fernández Del Paso about oceans and the hazards of pollution, a conscious decision was made to exhibit in a public space. The viewing experience in communal surroundings was accompanied by activities and videos that promoted the ocean and environment. There were parallel tracks with complementary documentary screenings and conferences about ocean to boost the message. The goal was to give viewers a meta-experience. While waiting around to see the film, viewers was enriched by the scenography showing native porpoises, vaquita marina, in a pod.

Community is embedded in Mexican life. Tequio, a word handed down from the Aztecs, conveys how working collectively mutually benefits individuals and their community. In a village, someone might work in the hospital on a Monday, Maite explained, not out of obligation but shared responsibility. That same feeling of “tequio” shines through in a VR documentary, S19, by Alan González that details the aftermath of the 2017 earthquake in Mexico City. The immersive experience thrusts the viewer in the terror, hospitality and neighborliness that followed. 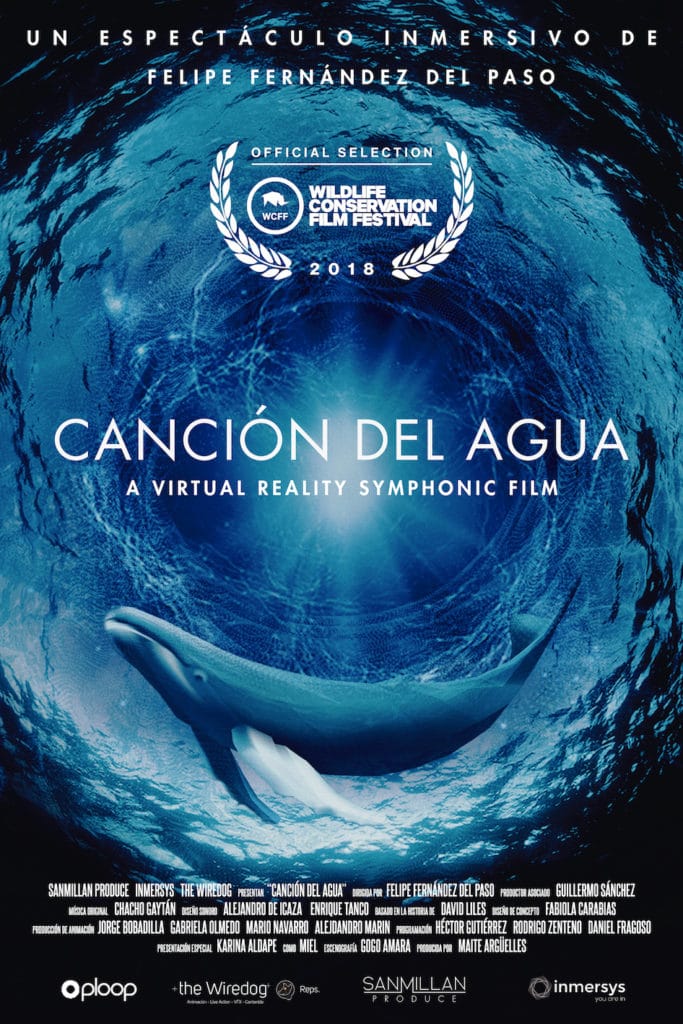 “It’s what is special about VR,” says Maite. “The new cinematic language in documentary allows you to tell social stories.” Santiago observes, “the way you are inserted as a character allows you to experience the narrative in a new way.” He continues, “the experimentation on this front, the first or third person perspective and how they interact within a film–does your character talk to another, for instance–will be quite interesting in the future.”

But what is typically Mexican in VR? Virtual Reality, whether it is with combinations of other senses like sight and touch, which is what Iñárritu used by having his audience walk in sand together with powerful visuals of fleeing refugees in the desert–or the sense of being submerged in water full of plastic, like with Canción del Agua–there is a heightened emotional response.

Mexicans really embrace emotion, maybe it is why we are so good at telenovelas.

“Mexicans do not shy away from feelings, or being physically close to each other. Mexicans interact in these kinds of situations,” calling to mind the tequio discussion before. He imagines that it must be different for, let’s say, the Japanese or Germans, and the way they would feel or discuss their responses to VR.

Increasingly, Mexico film festivals, just like their counterparts around the world, are offering a VR section to the regular programming. In Guanajuato, they took it one step further and sponsored three Mexican directors: Roberto Fiesco, Carlos Hagerman and Juan Rulfo to explore documentaries in VR, which were later incorporated an international VR competition section.

Adding extra dimensions to the VR experience for more visceral viewer involvement, going directly into the community to exhibit, and partnering directly with film festivals are characteristics common to Mexico’s VR scene. As the industry continues to mature, and headset prices lower, look for more audience and makers. And likely, more Academy Award winners.