Is the danger of the crisis an opportunity for VR?

It all started with the cancellation of the Mobile World Congress, one of the most important international technology fairs of the year. GDC, F8 of Facebook, E3 followed, but also in our country since last week all public events are prohibited until further notice. Last year this time, I was on SXSW for the launch of the VRTL Academy and to connect with thought leaders from the VR community as part of our podcast. The event in Austin is an annual high mass for content creators and media companies, but they too have decided to cancel this edition. We are still looking at keynotes and panel discussions to take place.

It is reminiscent of a well-known and actually very appropriate quote from John F. Kennedy: “The Chinese use two brush strokes to write the word crisis. One brush stroke stands for danger, the other for opportunity. In a crisis, be aware of the danger – but recognize the opportunity ”.

The Chinese do indeed seem to take that literally, because both via LinkedIn and via email sellers try to sell me face masks. Speaking of flat opportunism! But JFK had a point, and the late Johan Cruyff also had his own opinion about it with his well-known statement: “Every disadvantage, have its advantage”. 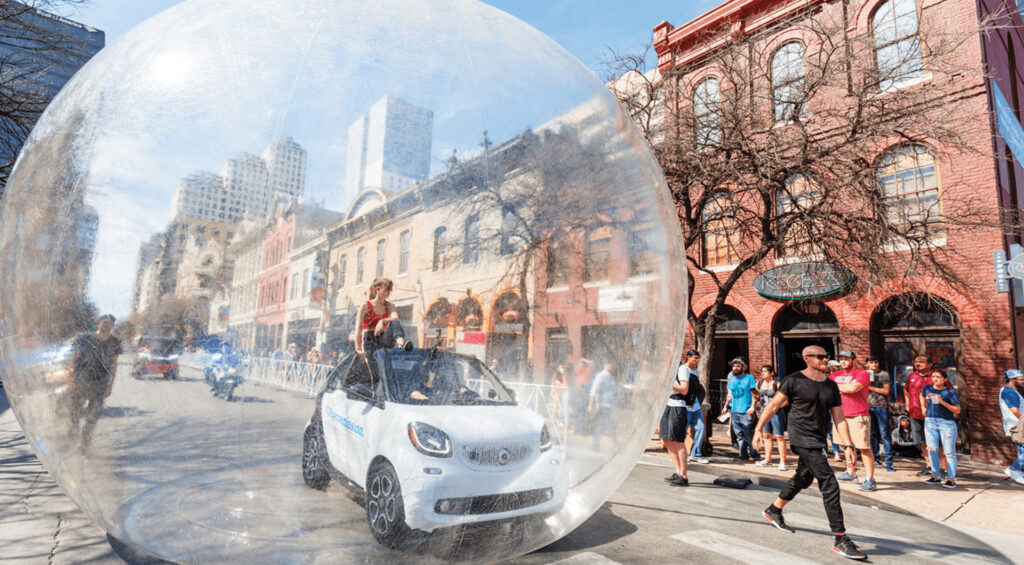 Corporates such as Google all let their employees work from home, but the smaller companies where teleworking was not yet well established are now taking this measure to heart. If we add the list of Stayinghome Club and Teamleader’s “Work Smarter”, we see that the number is only increasing.

The sense of teleworking grows

The fact that employers are now suddenly open to this, whether or not under duress, may in the long term offer a possible solution to our growing mobility problem. Everything depends of course on trust and professionalism, a knife that cuts on both sides (employer and employee). But if everyone takes their responsibility in this, we take a step in the right direction.

Tools to use for video calls

This is not to say that a physical office with colleagues or face-to-face meetings with customers are unnecessary. On the contrary, a person is a social animal and those personal contacts will always be necessary.

But if you are (temporarily) forced to stick to video calls, there are still the augmented reality filters from Snap to brighten things up in these dark days. With the “Snap Camera” integrate for eg. Skype and Hangouts you can put a filter on yourself, which can lead to hilarious scenes during such a telemeeting.

The Killer app for XR

Our company has been pioneering the world of virtual reality since 2014. Despite the fact that we have been lucky enough to have already worked on more than a hundred VR projects and there were really many that we can be proud of, the new medium is still not a necessity in the eyes of both company and consultant . However, in 2016 Zuckerberg spoke about VR / AR, today called XR, as “the next big computing platform” after smartphone and tablets.

To date, that “killer app”, the application that leads to massive market adoption, has still not been found. I previously quoted here John F. Kennedy who once spoke of the fact that in times of crisis you must remain vigilant for dangers, but also keep your eyes open for new opportunities. For years, we’ve seen traditional business models disrupted by disruptive start-ups, but who knows, the corona crisis may well be the biggest disruptor our society has seen in recent years.

A few weeks ago the first Educators in VR Summit took place in Altspace VR. This start-up offers free meeting and event rooms in virtual reality and was acquired by Microsoft in 2017. Spread over 6 days, 170 speakers were on a virtual stage and the organization could count on 2,000 visitors. The Altspace VR Program Manager announced afterwards that by virtualizing the event, approximately 9,000 cars were removed from the road and that the visitors had saved 8 million kilometers in total. So whether we are fighting a global outbreak, climate change or remote work, virtual meeting rooms and conferences can do a lot to help.

SXSW is now also looking into the possibilities of allowing panels and keynotes to continue digitally and / or virtually. HTC is moving its “Vive Ecosystem Conference” (VEC), now rebranded as V2EC, to a virtual world and is partnering with Engage, a similar platform to Altspace. The event will take place on March 19 and participation is free.

The strength of events

Of course, the strength of events lies not only in the inspiration and knowledge you get from keynotes and panels, but also in networking, workshops and discussions in a limited circle. Apart from the fact that I am convinced that human contact is still strongest, we are currently forced to look for alternatives. There is the Finnish “Glue”, a collaborative platform that uses the advantages of 3D graphics, virtual reality and cloud computing. They provide a solution for professionals worldwide who need remote access in a shared digital space to collaborate efficiently. Based on a 3D avatar you can meet in a customizable virtual space, present by loading your keynote or even brainstorm with post-its on a virtual whiteboard. The viewing direction, the movement of the mouth and the gesticulations ensure that the feeling of effective presence feels lifelike.

The goal of virtual reality is to take you to places where you cannot be in real life or at that moment. This can be for various reasons, such as exclusivity, geographical or economic restrictions (too expensive), fantasy worlds or for security reasons. Apart from the second life experiences such as Facebook Horizon, which give an experience that is not possible in normal life, real human contacts remain my preference. But climate, mobility and life at the time of Corona are pushing us to find and explore alternatives.

Who knows, is this crisis just good for virtual and augmented reality? People like to be together, but we should avoid social contact as much as possible. Maybe people are the “killer app that technology has been looking for for so long?