You need a distribution strategy,” says Liz Rosenthal, Founder & CEO of Power to the Pixel and Programmer of immersive content for Venice International Film Festival, the official competition section. Liz elaborates with VRTL Editor-in-Chief, Justine Harcourt de Tourville, the different venues (some overlooked) for VR distribution and challenges creators to start their process with distribution in mind. Liz also shared what the VR competition at Venice means for the field.

Justine:          Good morning, our [inaudible] Liz Rosenthal here in Berlin. And we are going to have another podcast here with Virtual. I’m Justine Harcourt-de-Tourville, and we’re very excited to meet you this morning. Welcome.

Justine:          Well, I appreciate it. Listen. You were invited at the VR NOW Summit, which covered VR obviously here at the Berlinale. And you had a great presentation that talked a lot about VR distribution. But before we go into that, let’s talk about your biggest claim to fame in VR at Venice Film Festival. It’s strange to be at Berlinale and we’ll talk about the Venice Film Festival but tell us about it.

Liz:                  So, Venice is obviously warm where we’re standing outside in the [inaudible] in Berlin. So, I’m one of the curators of Venice VR along with Michelle Reilhac. We set up the section. It’s the first official competition section in an A-list Film Festival, which is an important…

Liz:                  Yes. And so, we set up the section in 2017. That was our first edition. And we’d be off for another edition this year. So, we’re trying to show the world that VR and immersive content in general, is a new entertainment and artform, and it’s not just something that’s a tech buzz or demo. I think it’s something that a lot of the entertainment industry believes.

Justine:          Right. And the winner last year was a very important winner. Do you want to tell us a little bit about that, Liz?

Liz:                  Yes. So, the winner of our Grand Jury Prize last year was Spheres by Eliza McNitt. It’s a project about looking at the earth in the silo system in a completely different way and humanity through different theories around gravitational forces and planets.

It’s an interesting project because it’s pretty high profiled by a famous director. He’s an executive producer, Darren Aronofsky and has great talents attached in terms of actresses. So, there are three actresses who voiced over the three different parts. So, Patti Smith, Jessica Chastain and Millie Bobby Brown.

So, it’s really interesting to see now and we’re starting to see some of the established talent from film, from music, from literature and from other different artforms coming to the immersive world.

Justine:          Wow. That is exciting. And was it six figure or seven figure production in VR?

Justine:          Okay. Well, this gets hopes to VR filmmakers everywhere, that there can be great deals to be at. But one thing that you were talking about at the Confrontier was the need to have kind of a film festival strategy. Do you want to expound a little on that?

Liz:                  Absolutely. So, I would say, in fact, you have to have a distribution strategy for a project. And in terms of projects that are kind of more… it’s always hard to qualify what a project is like I’m going to say artistic or cultural that seats a festival run. I’m going to talk a little bit about that in a second.

I think what’s really important is that how you launch whatever you do. When you create something, any media or property or any art piece, you have to think where are you going to launch it. And so, in terms of festivals, you have to start thinking what festival has a lot of press, what has awards, where’s the right territory. Obviously, there’s timing aspect when you finish your project.

But I think with anything that’s always…

Liz:                  …one doing. And that is in any kind of product launch as well, and with media or not. So, festivals are really important, but I think there are some projects that may not work in festivals. They’re too expensive [4:31 inaudible] or you should do one and it should be the right place because of what it’s associated with.

[4:36 inaudible] at Comic Con because that’s super big brand-attached property. Some would go to more artistic territorial festivals that seats [inaudible]. But I think, with any distribution plan, you have to think of [4:51 inaudible].

And I think it’s new to the VR community because it’s very much about demoing prototypes. And because people kind of think that isn’t [5:02 the only case system] but that is a business case system, what’s really important is if we don’t value the things we’re making, treat them properly in terms of business strategy then no one else is going to treat them in the same way.

Justine:          Absolutely. Another thing is you had a whole list of different kind of venues that VR can be exhibited and some of those are rather uncommon. Do you want to go over a few ones that you put on the map that other people maybe are not thinking about?

So, in the location-based entertainment, some of them were unusual ones. I think all the things that people think, while this is in the future, travel. So, there were deals recently announced that CES between LD and Disney. So, this is for entertainment systems that start in a car, in Audi cars, in the backseat. These are cars that don’t have drivers. This is something in the future. What’s kind of interesting is driverless cars. So, travel is a really interesting area.

Recently, there were deals made at CES for new types of immersive entertainment systems, especially around car-sharing rides like lift. There was an announcement. And then, Disney Audi who demoed a new platform.

Justine:          I believe, if I’m not mistaken, in Los Angeles, FlixBus is offering immersive content on their rides to Las Vegas. For example, as another usage that we haven’t seen previously.

Liz:                  That’s right. There are theme parks in different set of forms using VR. So, theme parks started using VR as an overlay on existing rides. And now, there’s native projects within theme parks. So, I’ll use as an example, Darren Brown. He’s a famous precisionist. They did a kind of a reinvention of a ghost train in big theme park in the UK.

For them, that’s a huge, VR-only theme park in China, which has spectacular pictures. [7:43 inaudible] it takes a huge space. Of course, it’s China. And there are sort of more approaches to the theme parks and micro amusement parks like Two Bit Circus. So, this is [7:57 inaudible]

And then, I think in terms of the public spaces, you know, cities, buildings that are more kind of libraries, other places or the outside place is an interesting place where we could mix reality and augmented reality. There is a platform that seem right. And we’re starting to see, especially in countries that have something like public subsidy on public projects that they need partnerships.

Liz:                  Yeah. I mean I can think of some things in the UK. There was this lovely project with [Archie]. It was around the [8:40] by the Forestry Commission. So, it’s a public body that supports our forests in the UK. And they did this beautiful augmented reality project for families around forests.

Liz:                  They’re all [8:50 markers] and there would be so many other things. But there was something I read about recently. This is a virtual reality piece in Wellington, New Zealand. The municipality commissioned a virtual project around Wellington.

So, all the immersive tech can be used in so many different ways and so many different platforms. Hospital is another place. Obviously, in some countries, they’re private or we have private practice everywhere. But in public hospitals, there was something I read in the States [9:25 inaudible] pain control. [9:28 inaudible] is making content for various sides content to be used in treating people for pain or cognitive behavioral therapies.

Justine:          Well, I see it also with patients that can’t get home for the holidays, for instance, VR is coming into hospitals to give people Santa sleigh ride or some elements like that. So, it makes a lot of sense, so hospitals are another place. I’m wondering though if cinematic will think of new ways to explore these captive audiences.

Liz:                  Often, we forget that VR don’t need a headset to watch VR or to experience VR. So, another platform are domes or planetariums. Sometimes, you don’t hold too many people but there’s a huge new project at Maddison Square Gardens, constructing one sphere in Vegas and one in London, that hold 25,000 people…

Justine:          Okay, so more things to look at. Alright, last question. We’re going to tackle back to Venice where all good things happened. And can you tell us what we can expect for this year’s festival? Or would you have any specific advice you’d like to give to creators?

Liz:                  So, in Venice, we take all kinds of immersive formats, so virtual reality, mixed reality, and hybrid formats. So, from high-end complex associations, from multiple people with a lot of technology and sets and props, to things like 360, we opened whatever high quality worked across genre.

In Venice as well, we have a project finance market, the Venice production bridge market, so it’s half for each of them and half immersive content. And if you have a project in development and looking for finance, we specifically invite all of the major players around the world in VR, both financers, distributors, exhibitors from across all these silos.

Justine:          Which filmmaker wouldn’t like funding? Excellent. Can you tell us about… one thing I noticed last year was this spectacular show of women who did very well in the competition? Do you have any thoughts on this?

Liz:                  Yeah. We’re very proud last year that almost 50% of the directors in Venice were women. And this is completely different from the main competition sections of film festivals.

And I think something interesting is there’s a really strong community of women working in virtual reality. But [12:20 inaudible] innovation areas, women tend to come in even if people say this is about tech. And so, there’s a shortage of women in technology.

On the creative side, it’s really different. In the traditional media side, I’ve always seen a lot of women in my [12:37 inaudible] pixel when we did competition pictures. It was always a majority of women. And I think there’s a lot of established structure, you find that it’s easy for women to move into the [12:53 inaudible]. But there’s a fantastic community of women who are very active and very supportive for each other as well.

Justine:          This is wonderful. And then, high note in this podcast. Liz Rosenthal, thank you so much for joining us this morning. 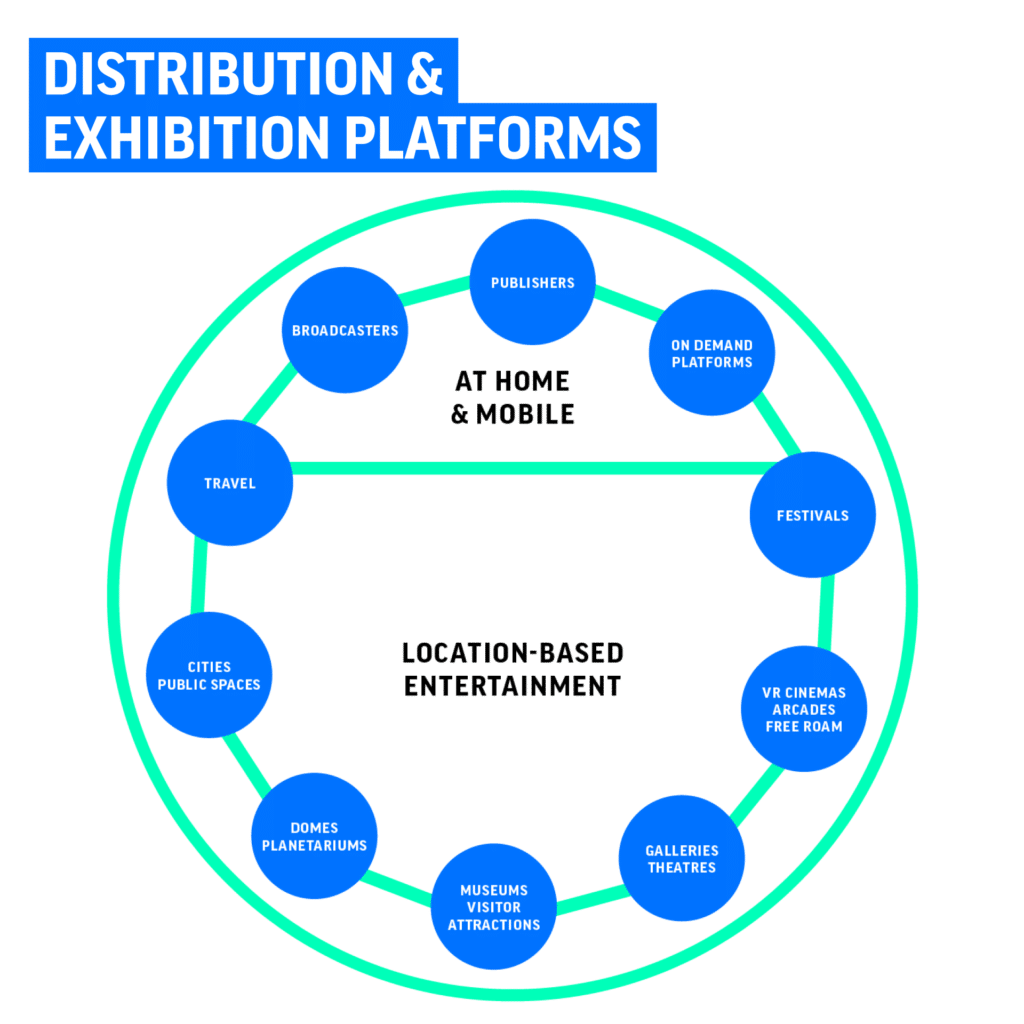